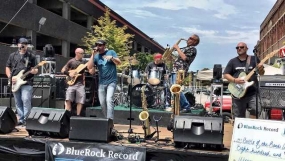 August 5 – And then there were 2. After opening the competition with 13 bands, the final 2 competitors in the Blue Rock Record “Battle of the Bands” competition hit the North Street stage Sunday afternoon at the Decatur Celebration.

After the popular vote and the judges vote, “Lunar Jive Machine” and “Chocolate In Your Pocket” battled it out for a chance to win $800 cash, 5 hours of studio time at Blue Rock Record at Heroic Age Studios, and the opportunity to open for Sunday night’s headliner “Daughtry” at the Celebration.

In spite of the Sunday afternoon heat, a nice crowd of local supporters turned out to cheer on their favorites. After a coin toss to determine who would lead off, “Lunar Jive Machine” hit the stage with a solid mix of cover songs. The band features a variety of Decatur music scene veterans including Ted Agee, Vocals; Ryan Brimm, Bass; Chris Lourash, Guitar; Jim McNeely, Saxophone; Josh Patterson, Drums; and Brandon Pilger, Guitar.

“Chocolate In Your Pocket” hit the stage next with a full set of solid all original songs that had their supporters in the crowd cheering. The band consists of young local talent including Cole Burnick, Guitar; Trace Davidson, Drums; Alex Erickson, Vocals; and Nick Scarpinato, Bass. 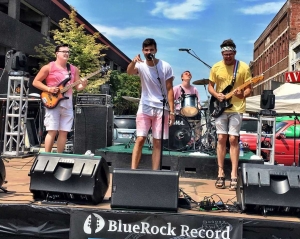 The fans had the final say on determining the winner by voting through the City Scout App, and when all was said and done, “Lunar Jive Machine” came out on top, and will open for Daughtry Sunday night on the Show Stage at the Decatur Celebration starting at 6:15.