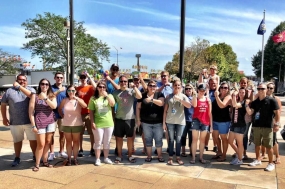 August 5 – After a reverse drawing Thursday evening, Krystal Sturgeon emerged victorious in the first ever Land of Lincoln Credit Union, #Celebration365 Contest presented by NowDecatur.com. She claimed the $1,000 Grand Prize, along with a pair of #DC18 VIP wristbands for this year’s festival.

Sunday afternoon, a new class of 20 finalists put on their wristbands which they will wear for the next year, all leading up to the 2019 festival. Bryan Hedenberg, one of the new contestants, says he’s a little paranoid about jumping in to the contest but is looking forward to the challenge.

The next batch of candidates were chosen for the competition by emailing Aric Lee of NowDecatur.com that they wanted to enter, and all of the contestants were chosen through a random drawing.

The ultimate winner will receive a $1,000 Grand Prize from Land of Lincoln Credit Union and a Decatur Celebration VIP Package for the 2019 festival.