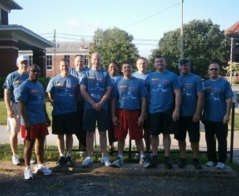 June 14 – A group of runners made up of law enforcement officers with the Illinois Department of Corrections made their way north on Route 51 Thursday morning.

Thursday, the runners began day four of the Torch Run in at the Macon County Law Enforcement Training Center in Decatur and were scheduled to pass through Forsyth, Maroa, and Clinton before ending the day in Bloomington. 79 runners from 15 IDOC facilities are participating in the event this year.

The Law Enforcement Torch Run is the single largest year-round fundraising movement benefiting Special Olympics Illinois. The Torch Run has two goals – to raise money and to gain awareness for the athletes who participate in Special Olympics. The Illinois Department of Corrections is carrying the Flame of Hope from Marion to Normal, which is the longest continuous Torch Run to ever take place in Illinois.

79 runners from 15 IDOC facilities are participating in the event. In 2017, The IDOC was named “Top Fundraising Agency” by Special Olympics Illinois after raising more than $148,000 for the organization.