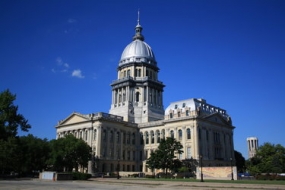 August 18 – Leaders from both sides of the aisle and from both chambers of the General Assembly are pushing for a resolution to the ongoing school funding reform impasse and they’ll meet behind closed doors Friday to possibly make a deal.

It’s been more than a week that schools have gone without general state aid checks. Despite that, districts across the state are opening their doors. While some wealthy districts may have enough cash on hand or reserves to stay open for the entire year, some districts are having to borrow from neighboring districts or take out loans. Some districts worry they won’t be able to stay open through the month of September without this year’s state funding.

General state aid can’t go out because there’s not an evidence-based funding model in place as is required by the budget lawmakers imposed on the state last month.

House Speaker Michael Madigan called lawmakers into session Wednesday but nothing was accomplished to resolve the issue. The House did vote on a bill that mirrored Gov. Bruce Rauner’s veto changes to the Democrats’ school funding reform measure, but Republicans decried the vote as a sham and either voted “present” or didn’t vote at all.

House Minority Leader Jim Durkin said that Friday’s scheduled leaders’ meeting, not sham votes or even a veto override vote, is where the focus should be. Durkin said the two sides are close to an agreement on a better way to formulate school funding, “one that is not only good for one portion of the state, but good for the whole state. And I do believe that we are getting close.”

Madigan responded to Durkin after Wednesday’s session. “I would expect that Mr. Durkin would say that,” Madigan said. “And I wouldn’t be surprised if he and I were close. The better question is what about Mr. Rauner.”

Madigan questioned Rauner’s willingness to resolve the issue because of recent Rauner-backed political ads. “So I have a serious doubt that Gov. Rauner wants any kind of resolution on this issue,” Madigan said.

But during the spring session and extra sessions this summer, it was Madigan who changed several bills at the last minute, in at least one case after Republicans and Democrats had reached an agreement. Madigan added the bailout money for Chicago Public Schools’ pensions just hours before the final votes, leading Republicans to drop their support. Madigan also inserted a “poison pill” into a budget bill at the last moment, preventing any schools from receiving funding until an evidence-based reform model was in place. It is the poison pill that is causing the current education funding crisis.

Durkin also said the governor does want a resolution. “That is why he has asked the four leaders, the first time in two-and-a-half years, to resolve one of the most daunting issues that we have been challenged with, that we have been fighting with, for the past 30 years,” Durkin said.