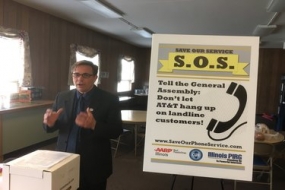 April 20 – A trio of consumer Watchdog groups were in Decatur talking about Legislation in the Illinois Senate and House that they say could leave seniors, rural customers, and others who depend on traditional phone service disconnected.

AARP Illinois, Illinois PIRG and the Citizens Utility Board held a press conference at the Macon County Senior Center to spread the word about the Legislation.

Jim Chilsen from CUB says this legislation can open the door to ATT drastically changing its service availability to certain customers.

“This Legislation would abolish the state requirement that AT&T serve landline customers. That would open the door for AT&T to end traditional home phone service, once the FC.C. gives final approval”.

Chilsen says the Legislation would also allow AT&T to abolish low-cost calling plans, which they are currently mandated by the General Assembly to provide in Illinois.

He also says one of the bills has passed out of committee, and one is still in committee, however, even if the bills do pass, they would still have to have final approval by the F.C.C.