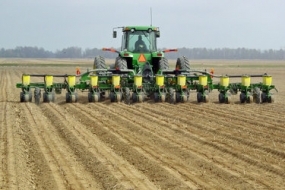 February 16 – The Midwest has seen a third consecutive year of decreasing farmland values.

The Federal Reserve Bank of Chicago stated in its quarterly newsletter that a zone that includes parts of Illinois, Michigan, Indiana and Iowa saw another decrease in land value for 2016, making this three years in a row.

Land values in central Illinois have dropped by 5 percent in the last year, according to a survey of almost 200 district banks.

“Potentially, we’ll see land rental rates following land values down if they haven’t already led them down a little bit,” he said.

The decreased land value also results in less collateral to get operating loans.

“We can start to see some secondary effects, potentially, in credit market because of the reduced asset values,” Kuethe said. “I tell farmers to make sure you have all of your statements in order so you can show your lender exactly where your strengths and your weaknesses are and how you plan to finance any debt.”

Kuethe warns farmers that 2017 is not a time to panic, but definitely one to approach cautiously.

“We’re going to again see low margins next year,” he said. “Maybe even decreasing margins from what we saw the year before.”

Land values in Southern Illinois weren’t part of the survey as they belong to a different federal reserve district.

Kuethe said that the lower-quality recreational soils there also saw decreases in value, but are prone to more swings as land values there isn’t tied to a set yield standard as are high-quality soils in central Illinois.