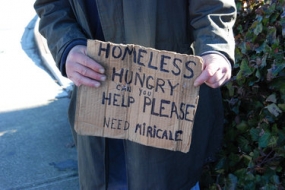 January 24 – Local shelter directors are encouraging Decatur residents to refrain from giving money to panhandlers in the city.

You may have seen individuals with makeshift cardboard signs primarily on the corner of Eldorado and North Main. While these people may be in need Director of the Oasis Day Center Todd Tuggle says it’s best to not give.

“It is feeding something that I don’t think the average person that gives realizes,” says Tuggle. “Oftentimes the messages on the signs are not true. Residents think they’re supporting something they’re really not.”

Tuggle says he’s seen an increased amount of panhandling in the last several months. He says the only reason he can attribute the increase is because it’s working.

“If it wasn’t working then they wouldn’t be there,” says Tuggle. “I’m asking residents to refrain from doing it because it’s only making the situation worse.”

Tuggle understands those that may feel guilty for not helping an individual asking for money but says that’s exactly the emotion that’s intended. Tuggle says instead of making a guilt driven decision, he hopes people will put thought into a decision to support organizations around the neighborhood that are helping those in need.

The Salvation Army Men’s Shelter, Northeast Community Fund, Good Samaritan Inn, Oasis Day Center and the United Way are some, not all, of the organizations in Decatur helping those less fortunate.

Salvation Army Men’s Shelter Director Jeff Mueller says the panhandling is the worst he’s seen in his thirteen years of residence in the area.

“We need to be meeting these folks where they’re at and then trying to help solve the issue and let them know it’s not acceptable in the community,” says Mueller. “I think it’s critical we find out why they’re there and make every effort to stop it.”

Mueller says it’s important to put the agencies in a spot where they can help solve the problem and that running the panhandlers off the corner isn’t going to fix it.

“Unfortunately we do have a good number of panhandlers right now and looking back we haven’t,” says Mueller. “It’s only 2 or 3 percent of our total population of individuals needing services. The 2 or 3 percent, or 8 to 10 people, are really going to give those who need services a black eye.”