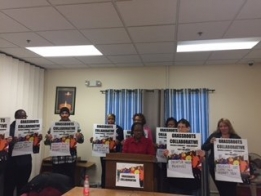 May 3 – Decatur residents voiced their frustration over the continued state budget impasse.

Several spoke out Monday night at Old King’s Orchard Community Center as part of the Grassroots Collaborative. The group asked that Springfield pass a fair budget and to do it now.

“I think before they were thinking this would just fix itself,” says Flowers. “A lot of times people hear about things and say, oh they’re just talking, it’ll be ok and it’ll get fixed, but people are understanding now that the fixing is within them. They have to go to the legislators and say look this is what we want. Sometimes they don’t know, sometimes they think it’s ok. We need to let them know that it’s not ok.”

One speaker was Amber Ginger who told her story of living with three children and no power. She says the program that helps her family afford power is struggling due to the lack of budget and because of that her family is suffering.

To try and help spread awareness of the people affected by the budget impasse, the Grassroots Collaborative is looking to send letters to the editor.

“We’d like to send letters to the newspapers about what’s going on,” says Flowers. “Our children and our people are adversely affected and that’s not good.”

Flowers says the reason for the meeting was more on teaching and educating than anything else. Lisa Stanley, Decatur Township Supervisor, says she’s talked to a lot of clients on a regular basis and they’re all suffering. She says the stories that were told should help put things in a better perspective.

“The positive is hearing each other’s stories and knowing that they’re not alone,” says Stanley. “Knowing that we all need to work together and come together to try and urge our state legislators to move forward with a budget.”