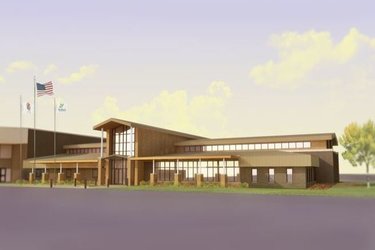 DECATUR –While the budget situation in Springfield is seemingly at a standstill, so too is the building process of the new Student Success Center at Richland Community College.

Executive Director of Public Information Lisa Gregory says the new building was a state-funded project in which they would receive $6 million to build the structure.  She says Richland was required to match 25 percent of the money, and they raised $1.1 million to help fund the project.  Now, Gregory says they can no longer build.

“Due to the lack of state budget, the college was told that all state capital projects had to be halted,” says Gregory.  “You were only allowed to continue the project if you had a local match of funding, so we began to use the $1.1 million that we had raised ourselves.”

Gregory says staff met regularly to decide how to use that money.

“Our staff met weekly to determine where we were budget-wise,” she says.  “Last week we expended all of that $1.1 million and construction has stopped on this facility.”

Gregory says, so far, the building process is still early.  She says Richland gave themselves a 364-day goal for the project.   As of right now, only the steel beams have been put in place.  Gregory said they had planned to open the new facility next spring, but she isn’t sure that will be the outcome with the budget impasse right now.  She says they are basically stuck in the mud.

“We are certainly disappointed that we are not able to complete the project because it has displaced our student services to an entirely different building,” she says.  “It really does inconvenience our students and inconveniences our enrollment process.”

Gregory says that since they thought the building would only take a year to construct, they moved the location of student services to the workforce development institute.  She says that move has some students confused, even though they have tried to put signage up to direct them to the correct area.

When the budget gets put together, Gregory says they are not certain that they will receive the same amount of money promised by the state.  However, moving forward, Gregory indicates that they will need some time to plan out the next steps before continuing construction.

“It will depend on when the budget occurs, if our appropriation is in the budget, and also where our contractors are,” says Gregory.  “So there are a lot of elements that will go into the decision of when they can begin construction again.”